BOOK REVIEW: "A Hive for the Honeybee" 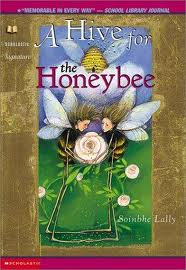 Hummmm.......The hum of a hive of bees was easy to imagine while reading this short novel by Sionbhe Lally.  I was originally not planning to read this book.  I picked it from a 9th Grade reading list for my daughter, but some of the verbiage on the cover led me to think maybe I should read it first.  I'm thinking that was a good idea.

In A Hive for the Honeybee, we meet a couple of newly-born worker bees, Belle and Thora.  The two workers become friends, but their personalities are strongly contrasted.  Belle is a worker and can't imagine anything else other than gathering pollen and honey, and taking care of the drone bees.  Thora dreams of something outside of the hive, although she really has no comprehension of what that something might be.  At the same time, two drone bees named Alfred and Mo, struggle with their own unique roles within the turmoil in the hive after their Queen takes off to form a new hive.  When a new Queen is born, the drones go crazy with desire (stereotypical male behavior).  Many die when mating with the Queen. The remaining drones seem to take it in stride, all except Alfred and Mo who seem to have some sense of what is to come.

The new Queen decides to change things up and lays only worker bee eggs (female) and no drone bee eggs (male).  The Queen and the other worker bees are, apparently, tired of taking care of the drone bees (can you blame them?)  I won't tell you what the end result of that is. Instead, I'll go straight to my opinion:

Although there was some interesting imagery and beautiful language throughout the book, it was really quite dark and fatalistic.  Probably wouldn't recommend it to a 9th grader, and definitely won't be letting my 10-year-old read it.  On the plus side, it was super short and I was able to read the entire thing in just a couple hours.  A low "OK" read.
Posted by The Book Goddess at 7:59 PM

The Book Goddess
I love books. No, I mean, I REALLY love books! If I could do anything at all with a spare moment, it would certainly involve having a book in my hands. I love the way a book smells, especially that musty scent of an old library book. I love the way the pages feel when I turn them to see what happens next. I love a great story that makes me laugh out loud, or makes me cry, or just makes me feel good. Like I said...I LOVE books!